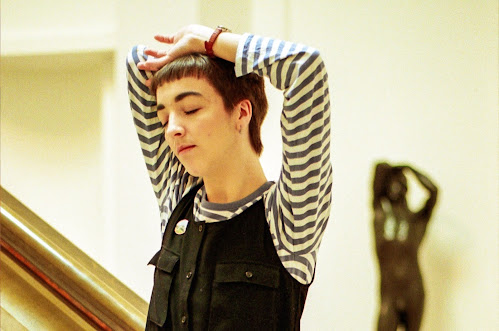 Arriving via SYM faves Sad Club Records, the latest single from Rosehip Teahouse is one hell of a charmer. Lilting melodies and glittering bells give ‘Thought Number 3’ an almost transcendental melancholia, as singer Faye Rogers vocals echo atop the band’s crystal horizons.
Of the track, Rogers says:
“I wrote this song a couple of years back now. I was really struggling with my mental health, and this song was my expression of feeling as if my problems were stopping me from being able to live my life in the way I wanted to.
“The version of this song on the EP is the one I recorded the day I finished writing the song in 2017, miserable in my room at my parents’ house using a cheap microphone and garageband on an old macbook that I was putting off returning to my ex. It feels like a long time ago now, but every time I hear it, it feels like 3am in that room that was too warm again.”
This pre-empts the Cardiff DIY group’s new EP ‘Chillin in the Void’, also out via Sad Club, next month. You can pre order it here
Sad Club Records · Rosehip Teahouse - Thought Number 3